Power of the Student

At the end of May, specialist fit-out and refurbishment contractor TROY group assembled a delegation of leading student accommodation experts to debate the current sector state and likely future direction. Specifically, the panel were asked to debate ‘the power of the student’. 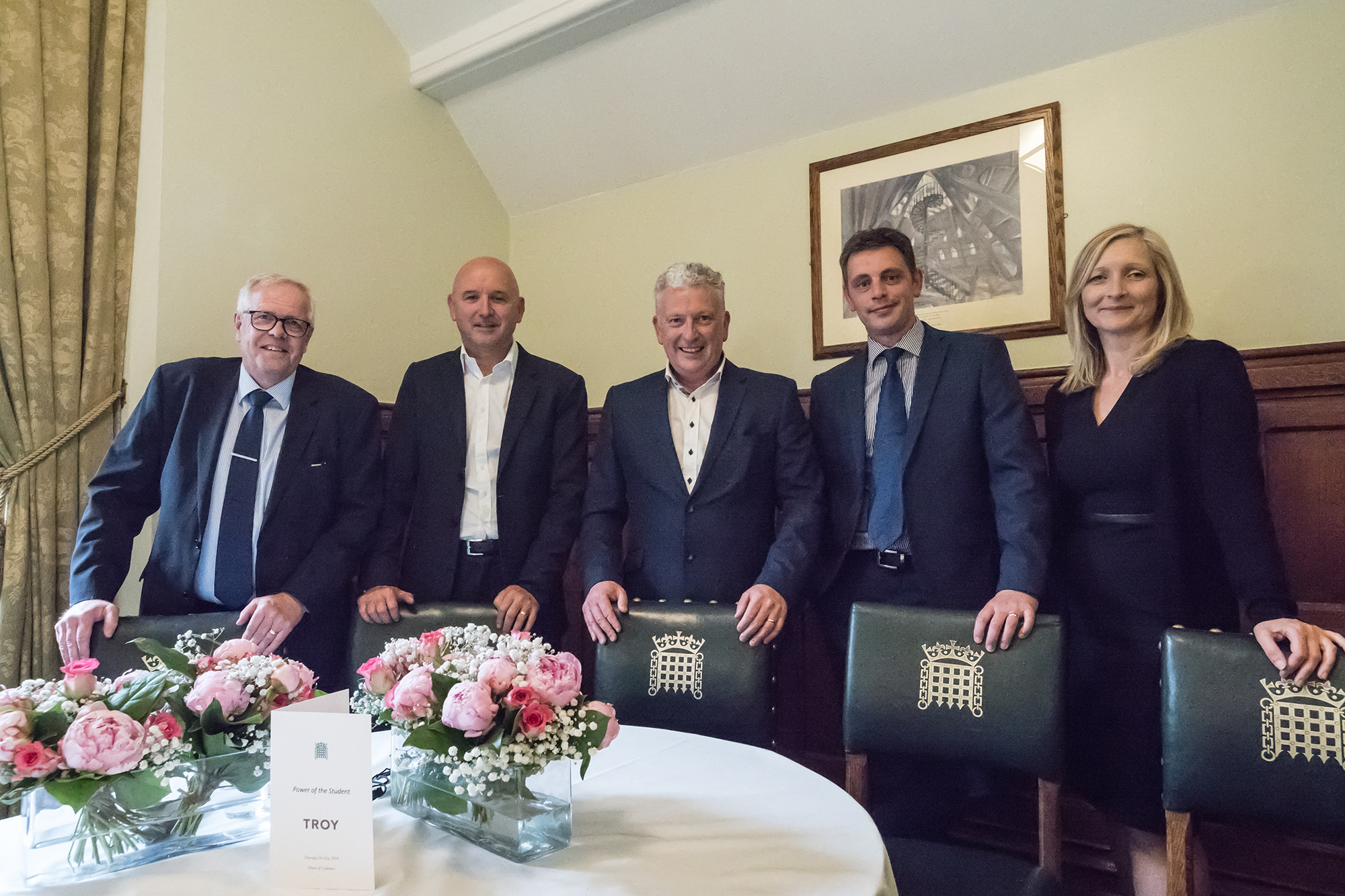 Taking place over a roundtable lunch in the Palace of Westminster, sponsored by Troy’s local MP (Bury St Edmunds constituency) Jo Churchill, the debate was kicked-off by their non-executive Director, John Frankiewicz who introduced Troy’s motivation for such  debates.

“We’re exploring a number of student accommodation projects and discussions like the one we’re having today means we can not only elevate key concerns to the sector, but learn valuable lessons from a sector-wide stakeholders and focus on what students really want,” he said.

“As building contractors, we need to look at the quality of what we do, and there is no doubt that students are flexing their muscles to impact and influence what this quality entails.”

“Students should be able to influence and affect their built environments for many reasons; wellbeing being a key driving factor. Mental health, rightly so, is receiving more attention in society and we know that accommodation can influence our ability to thrive. What’s more, the UK’s 1.7m students are the people who are going to go on to do brilliant things, so they are a very important client base.”

With that, Frankiewicz handed over to guest speaker Philip Hillman, Chairman at JLL UK, who made it clear that today, students hold more power than they’ve ever had. In large part, said Hillman, that is relative to increasingly fierce competition between universities to attract students.

“Higher Education (HE)  is a competitive market,” he said. “Universities are competing for the best students – and in some cases, there is an ‘any student will do’ attitude. We have seen big fluctuations in student numbers at many universities in recent years and there have been winners and losers.”

The competition, Hillman added, has been fuelled by the increase in tuition fees, with no institution wishing to demand less than the £9,000 yearly costs out of concern that to do so would demean the perceived quality of courses on offer. “The prospect of leaving university with potentially eye-watering debts of £50,000 has certainly concentrated the minds of students who demand value for money in all aspects of their higher education,” he said.

The introduction of wider ranging metrics for university league tables has also had an influence, according to Hillman, with far greater weight being given to the quality of undergraduate teaching and the student experience. “A new student-centred ranking system has been put in place that replaces the old research-focussed assessments,” he said.

However, the increased competition shouldn’t just be viewed in a domestic context. Hillman noted that increasingly UK institutions are competing with international universities such as those emerging HE markets in China and some African countries, with many offering English-taught classes.

Sarah Richardson, Group Editor at ResearchResearch, questioned whether the UK’s ability to attract foreign students could be adversely affected by Brexit. “I think in terms of numbers, what’s really interesting to me is the foreign student dynamic and whether the atmosphere around Brexit, regardless of whether international students are from Europe of not, deters people from coming here,” she said.

Hillman responded: “There is an argument that any impression from Brexit that we’re a little island and don’t like strangers has been more than overwritten by the Trump effect in the States, where that message has come across a little stronger. And that’s where the most international students go.”

Naturally enough, all of this has a knock-on impact on the student accommodation market. Quite simply, students paying £9,000 a year in tuition fees alone will no longer put up with inferior accommodation. “One area universities looked at quite early on was the quality of their accommodation,” said Hillman.

“They recognised that to attract students who were probably looking at multiple university applications, having attractive halls of residence could be the tipping point in a very important decision-making process. They recognised that with many students visiting with family in tow, open days were an opportunity to impress parents with all aspects of accommodation; quality of fixtures, proximity to lecture halls and students union.”

So, students are increasingly picky and have the power to be so, but according to Hillman they are also increasingly cost-conscious when it comes to accommodation. As a result, finding a way to provide high quality yet affordable accommodation options is the holy grail for student accommodation developers and providers.

The problem is particularly acute in London, where the central location of many campuses makes it next to impossible for developers to build anything but extremely high-end products, largely aimed at wealthy foreign students, anywhere near teaching facilities. The situation obviously presents problems for less affluent students, especially after their first year when institutions generally provide access at least relatively affordable accommodation. (muddled; needs reworking, but not confident what he’s trying to convey)

This conundrum prompted Marcus Lyon, Regional Director at Faithful & Gould, to ask whether there wasn’t *is* ? an opportunity to build in more affordable areas 45 minutes to an hour outside city centre locations. “Is there an untapped market there?” he asked. “The metric used to be a mile away from the heart of the campus, which is bonkers in London. So, there must be a market in that outer London area.”

In response, Hillman agreed that developers are increasingly looking at less central areas but warned that there was only so much that either universities or students would put up with. “A lot of developers have been focused on areas like Wembley and Stratford,” he said. “We’ve seen the move out from the centre because it’s just impossible.

“But even if you’re not going to do a deal with a university directly, you always need to have a good relationship with a university as an operator. And if you say ‘hello, we’re going to build accommodation 45 minutes away from campus’, quite a lot will say it’s not ideal. Travel time is absolutely critical for a lot of them. Having said that, I think Crossrail may give us some interesting new hubs potentially.”

Mark Travers, Student Residential Operations Director at the University of Derby, agreed with that assessment, arguing that proximity remained a critical consideration for institutions. “I don’t think you can afford to be too far away from the academic estate – libraries, seminar rooms, lecture theatres and that kind of thing,” he said.

Also discussed was alternative way to reduce costs, both in terms of build and rent, such as modern methods of construction (MMC), something that some developers are already using in areas such as Wembley. This was an area that Terence Stocks, Director and Head of Public Sector and Education at Faithful & Gould, believed had great potential, referencing initiatives emerging from Whitehall in particular.

“The Transforming Infrastructure Performance programme that is coming out of the Cabinet Office is all about MMC and one of the key bits they’re pushing is componentisation,” he said. “So, can you get components that go together really quickly? Can we manufacture components that can be used right across an asset class like the car industry does?”

“The Prison Service is spearheading it at the moment. Is there appetite for developers to get together and all use the same super-structure bits?  The result being everyone benefitting from economises of scale. Early research shows that you can save 30% from your super-structure cost which can be reinvested in a variety of different ways.” Frankiewicz (pictured speaking above), however, expressed a note of caution. “I think we called it modern methods of construction about 30 years ago,” he said. “The industry is slow coming forward and undoubtedly there is a skills shortage. It doesn’t collaborate well or grab new technology. By anybody’s metric there must be 20-30% waste in the construction process. I don’t know what the answer is.”

Hillman added: “Land price again is the problem. We can do all we can with modular and modern methods of construction to reduce costs, but it’s the land that’s killing it and it’s not getting any cheaper.”

So, despite the increasing power of the student, providing what students want most – affordable accommodation – is an incredibly difficult nut to crack. As Hillman put it: “Affordability remains the challenge for both universities and the private sector. As things stand, the UK risks pricing itself out of the HE market.”